Maggie Throup: Conservatives’ long-term economic plan for the Midlands will mean a better future for families in Erewash 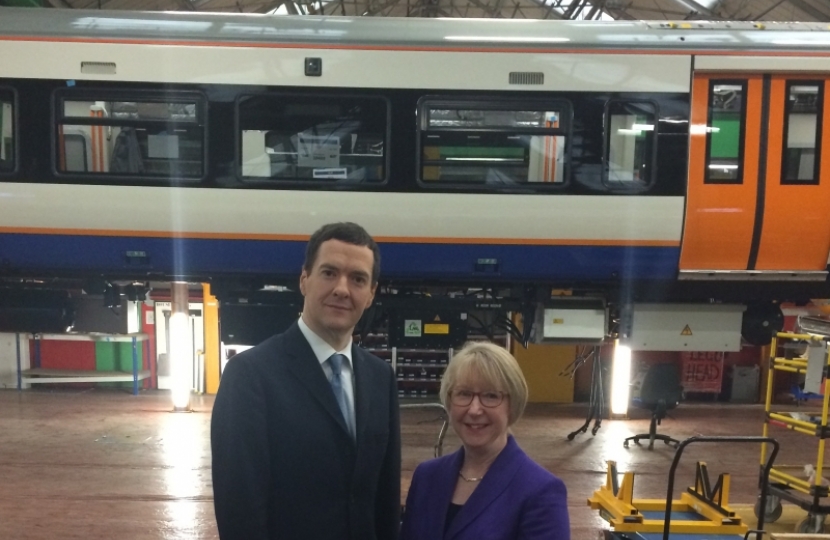 Maggie Throup, Prospective MP for Erewash has welcomed the six-point long-term economic plan for the Midlands laid out by the Prime Minister and the Chancellor during a visit to local employer Bombardier.  It shows what has been delivered by Government, what is underway and what more can be done to support the regional economy in the long-term.

Maggie Throup said: “As Conservatives we know you can only have a strong economy if you have a balanced one. Today’s plan shows clearly how we will deliver that with a strong Midlands – which will mean more economic security and a better future for people in Erewash.

“The plan will mean families better off, with more people in work, new housing, better roads, better railways, and improved schools and skills.

“The only way we’ll be able to achieve this is by sticking to the long-term economic plan that is already starting to deliver a better future in our area. The choice at this year’s election for people in Erewash is clear - it’s between strong leadership and a plan that is working with the Conservatives, or the chaos and insecurity of Ed Miliband and a Labour government, who would take us backwards.”

The plan sets out six commitments to:

2. Create 300,000 extra jobs in the Midlands – by backing the core strengths of the local economy like advanced manufacturing and engineering.

3. Put skills at the heart of the economic revival of the Midlands – working with local businesses and the Local Enterprise Partnership on a radical new matching service for local working people and increasing skilled apprenticeships. We are devolving power over skills, which is currently centred in Whitehall, to the Local Authorities and Local Enterprise Partnerships in the Midlands, on the condition that different areas combine together to produce a strong joint plan.

4. Deliver £5.2 billion of investment into new transport infrastructure in the Midlands – upgrading the motorways to four lanes, delivering faster north-south rail connections and new east-west links, and make the most of the economic opportunities of HS2.

5. Back science and innovation in the Midlands - focussing on the plan for local universities to develop an Energy Research Accelerator and support new technology in the world-leading automotive sector.

6. Improve the quality of life in the Midlands – by regenerating run-down estates, investing in the county towns, supporting the construction of 30,000 new homes and making the improvements to local education so 150,000 more pupils attend outstanding schools.

Because there are no quick fixes to achieving these important goals, the Conservatives have set out a specific timetable to deliver this over the next parliament and then the following decade. By doing so, we will build a more balanced British economy, with more jobs, prosperity, and a brighter future for hardworking taxpayers and families across the Midlands.